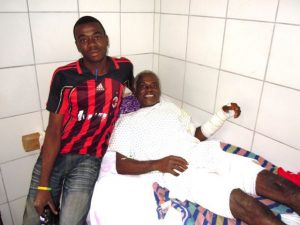 His name is Douckaga Douckaga, he’s 52 years old, he’s an elder in the Alliance church in Niali, in south Gabon, and he survived a buffalo attack. On Monday, July 26 a year ago he left the village on foot with his two teenage sons and their dog to check their small animal traps. They carried with them two loaded shotguns, and two machetes. As they approached one of the traps a buffalo suddenly ran by them, dragging on his hind leg a small tree tethered to a thin steel cable. Douckaga ran after him with his shotgun, followed by the dog and his sons. The buffalo ran into waist high grass and as they cautiously approached, charged Douckaga. He aimed at the buffalo and fired point-blank, but the gun misfired. A second later the buffalo threw him to the ground and began twisting his horns through both of Douckaga’s his thighs,trying to tear open his groin. Douckaga grabbed the buffalo’s horns and shouted for the son with the other gun to come close and shoot him. Meanwhile the buffalo fought to throw Douckaga off his horns, thrusting one of horns entirely through his left arm in two places. The dog attacked the buffalo from behind, temporarily distracting him. At that moment Douckaga’s son ran up and thrusting the shotgun against the buffalo’s neck, fired. The buffalo staggered, but then turned on Douckaga again, who was still shouting and clinging to the bull’s horns. His other son then chopped hard at the bull’s neck, and dropped him.

Douckaga checked himself out, and realized that the horns had missed all major arteries in his arm and thighs. They were seven kilometers (5 miles) from home, so he told the boys they needed to start home while he had enough strength. He walked all the way home on his own power. Several hours later he arrived at Bongolo Hospital with his wife and one of his sons. Our surgical residents took him to the operating room, washed out his wounds and dressed them, and told his waiting family that although his injuries were serious, he was expected to recover quickly. By the time I saw him he was resting in bed comfortably and smiling at God’s grace.

That same day, a group of about 30 women from the Alliance churches in Lebamba was scheduled to travel 500 miles to a city in northern Gabon for the annual women’s retreat. Douckaga’s wife was also registered to attend the same women’s retreat. To everyone’s surprise, after he returned to his bed from the operating room Douckaga turned to his wife and told her that he wanted to attend the retreat and not stay with him. When she objected, he told her that he was doing fine, and he wanted her to go! At his urging, she boarded a bus the next morning and went with the other women to the retreat.

The next day Douckaga and his sons ate roast buffalo!