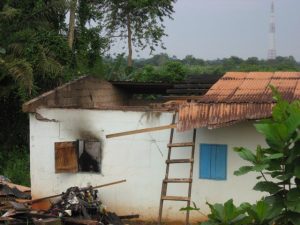 One room in a small hotel in Lebamba recently caught fire. Paul Davis was alerted to the fire by cellphone and he and a small crew took off to the other side of Lebamba with the newly acquired Bongolo Hospital Fire Truck. The road between the hospital and the main part of town is full of ruts and broken pavement so it took awhile for the Fire Truck to arrive at the scene. The fire was already out but it had demolished that room and also done smoke damage in the rest of the building. This was the first time that the FireTruck crew had been called upon. Oh, that the roads would be fixed!

To learn how Bongolo Hospital obtained a Fire Truck check out the following article: Fire Truck.