From an August 1st letter written by Dave Thompson: 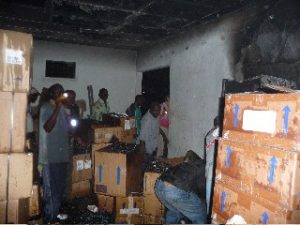 At 7:30 pm tonight I got a frantic call from one of our nurses with the alarming news that our hospital warehouse was on fire.

Becki called around the station for others to come while I raced to the hospital.  When I arrived, about 200 people (mostly the local youth group, which was meeting in the church next door) were screaming and running around, trying to get into the lock building to put it out.  I could see the glow of flames through the windows.  Since it was dark, I parked my car with the headlights on the door.

I grabbed the fire extinguisher from my car and ran to the steel door with my keys.  When I cautiously opened the door, I could see flames reaching to the ceiling from behind a six foot high stack of boxes–our most recent medicine order.  The ceiling was already on fire, along with about 10 boxes.  At the center was a refrigerator that was burning like a torch.  I sprayed it with my car extinguisher, but it ran out after about 10 seconds.  About 10 young men from the youth group and hospital crowded in, and I shouted for some to bring buckets of water and the others to form a chain to drag our medicines out.  In seconds we had boxes flying out the door and buckets of water flying in–half the time colliding!  What pandemonium!  Above it all I could hear women singing praises and prayers to God! 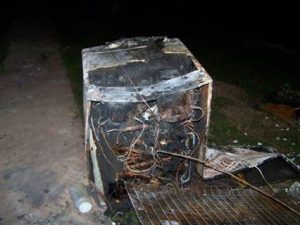 Next to the fire, I was soon elbowed aside by younger firefighters who threw the buckets of water on the fridge and through the burned out ceiling and up onto the burning rafters. Keir Thelander arrived and took charge of that effort, so I worked on getting most of the boxes around the fire out of the building.  Then I went outside and discovered the fire was spreading to the waiting area roof of our new lab, which is right next door.  I got some good throwers working on that one and in a few minutes we doused it.  The water coming out of the hospital faucets seemed like a trickle, but after 30 minutes or so,  Keir and his team gradually got the fire inside under control.

We may have lost 10 to 20 boxes of medicines and supplies and a refrigerator full of we’re not sure what.  The roof has a huge hole in it and there is extensive damage to the ceiling and rafters for about 1/3 of the building.  But we could have lost the entire building, with over $200,000 of medicines and supplies in storage!  We praise God that the youth group was there and that so many volunteers rushed to help.  And nobody was burned or hurt. 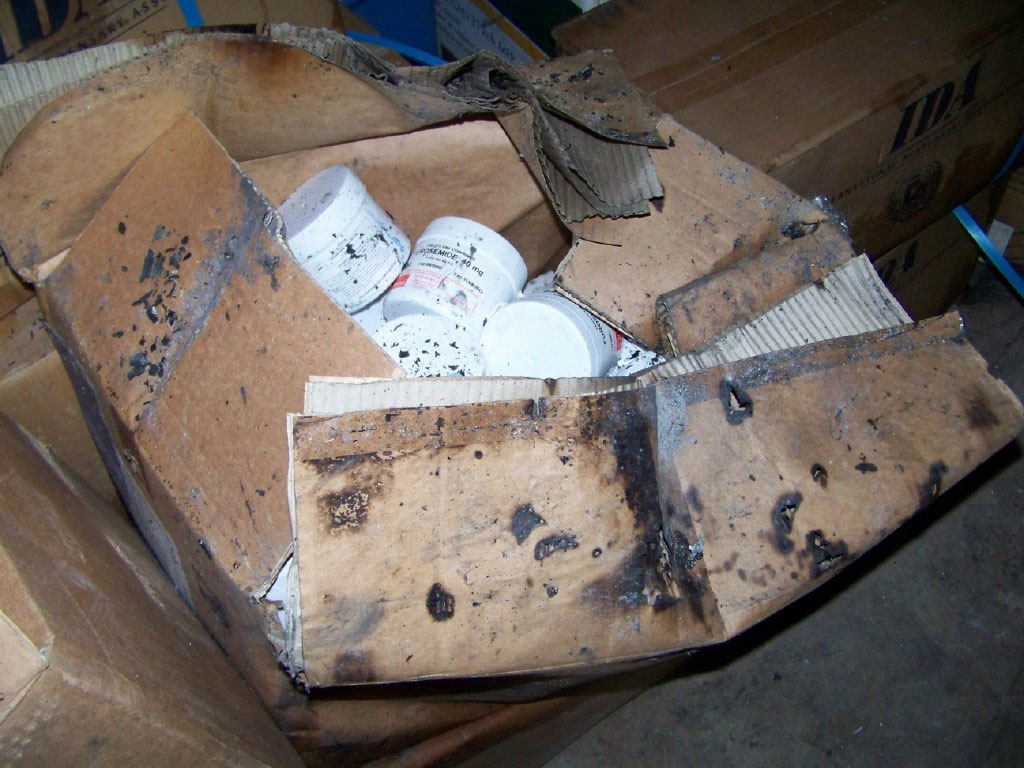 Praise God with us for protecting these precious medicines and supplies and helping us to get it out.  Please pray with us that God will help us replace what we lost, and repair our warehouse.