Recently teams from South Shore and Faith visited to Bongolo and rocked the roads. Well actually they repaired the roads using laterite. Laterite  is a naturally occurring gravel formed by the dissolution of primary rock. 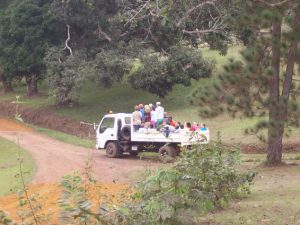 Located approximately 3 meters below the surface, laterite needs to be uncovered then broke up with picks, a task that South Shore from Mass and Faith from Ohio, gladly accepted. These 2 teams put their heart and back in it and got the job done. In a matter of a few days all the roads on the mission were repaired what a great blessing to the mission staff. They are coming by the truck load and Jumping for Joy!

South Shore was the first official team for STMO (Short Term Mission Office) at Bongolo. A 22 person team could be viewed as a challenge to host, but working out the logistics for this team was well worth all the preparation. South Shore was a blessing not only to the mission but very specifically to the Kelly’s ( The STMO family at Bongolo). With a heart to serve they arrived willing to sleep wherever space could be found and the men were even willing to do all their showering outside to avoid an overload of the septic system.  One evening there was a time of praise and worship, God was glorified as praise emanated from Foyer and ascended to the throne of the “KING”. The evening concluded as this team of 22 servants gathered around the Kellys and lifted them up in prayer. A day after their departure the Faith team arrived and finished the road work that South Shore started.

Thanks South Shore and Faith.