As told by Dr. Renee Valach and Pilot Steve Straw: 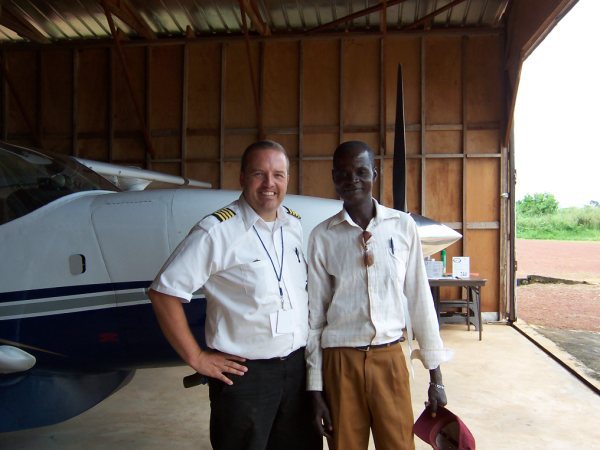 Dr.  Valach wrote that Fidele  had been one of the workers who cut the grass on the (Bongolo) mission station until a heart problem stopped him from working.  February 21st  Dr Valach will accompany Fidele to a hospital in Kenya, where he will undergo surgery to fix his heart valve. He has small children, and his heart problem is serious so this is a wonderful opportunity for him. 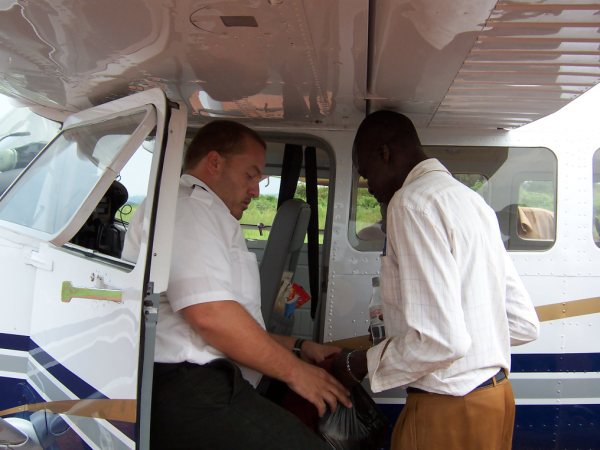 Recently,  Fidele  flew to Libreville with Air Calvary for part of his passport application. This was his first trip in a plane and Pilot Steve Straw explained the important safety issues like the seat belts. There were a few local men standing near the plane, and while Steve spoke they clarified each thing.  Steve wrote that the flight went really well.  If Fidele was nervous, he could not tell. Fidele would occasionally point out the window and ask Steve to please identify the villages that they were flying over. He also made many comments about the river that was below their flight path for much of the journey- the Ngoungie. He said it was very big! During the leg of the flight that passes over the city of Lamberene,  Steve identified the city and told him to look below.  Fidele  said, “Yes- I see it. Here- let me open my window so that you can see also.”  Steve assured him that he was familiar with the town and didn’t need to see it today. Upon landing Fidele thanked God repeatedly and said “Dieu est Grand” (God is Great). 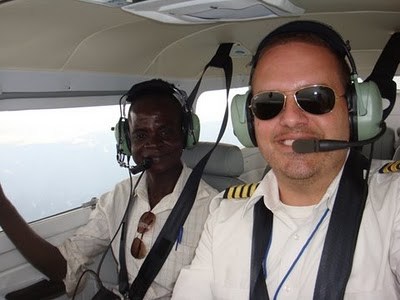 Dr. Renee Valach is now attending a medical conference in Kenya which will end just before Fidele flies from Libreville to Nairobi, Kenya. She plans to meet Fidele at the Nairobi airport  on February 21st and be there while he has heart surgery.   Pray for Fidele as he travels alone to Kenya, that the flight would go smoothly. Pray for the surgeon as he operates on Fidele’s heart valve. Pray that the operation will be successful.

If you would like to GIVE to “Bongolo Heart Send Project” so that others get the same opportunity for open heart surgery as Fidele click HERE.

To get updates about the new Bongolo Medical Aviation program with Air Calvary follow Pilot Steve’s blog  “Arrivals and Departures”  by clicking  HERE.

Dr. Renee Valach wrote concerning meeting Fidele at the airport in Nairobi and then going with him to  Tenwek Hospital in Kenya. It worked out perfectly that she was able to meet up with and translate for Fidele at the Visa/Immigration desk, since he did not speak Swahili or English. The next day was the day for the surgery. Fidele was already anesthetized for surgery but before starting,  another test  was performed for his heart. Everyone were very surprised to find the problem with his valve was no longer severe, but is now mild to moderate! Fidele had been seen by one cardiologist over the course of many years and at least two other visiting cardiology specialists at Bongolo, all of whom had all agreed that his heart valve condition was severe.  Since the problem was now no longer severe, the surgery was not done!  While Fidele was not completely healed, God said, “Not now” for his operation in a very dramatic way!

Both Dr. Valach and Fidele returned to Gabon. Fidele plans to start working again as a Bongolo station yardworker.

Let us join Fidele in Praise the Lord for HIS touch!